As someone who dabbles in both photography and graphic design, I spend a lot of time in graphics-oriented apps. There are several leading apps in this category, but which is the right one for you? Is Photoshop better than GIMP? Is Pixelmator better than Photoshop?

The Pixelmator team created the cheaper of the two and is used by people who like to design and do photo editing as a hobby. Photoshop is a better option for professional designers. Many built-in effects contained in Pixelmator make it a great Photoshop alternative. It is simple to learn.

The free one. GIMP is free, open source, and cross platform. It has a reasonably good feature set, but doesn’t perform particularly admirably and has a user experience that is decidedly un-Mac-like.GIMP is free.

The big one. Photoshop has been around for a long time, and is the industry standard. Photoshop is the archetypical ‘professional’ app: tons of features (some questionable), a usable-but-not-great UI, and a ridiculous price.Photoshop CS5 is $700, Photoshop CS5 Extended is $1000. Amazon has small discounts. Students and teachers get big discounts.

The shiny new one. Pixelmator is relatively new, incredibly inexpensive, and has quickly gotten a good reputation. Pixelmator is beautiful and a pleasure to use, performs very pleasingly, and has a respectable feature set.Pixelmator is $30 on the Mac App Store.

To review and compare these apps, I came up with four real-world tests to put them through. The tests are designed to evaluate the apps’ capabilities and performance doing actual work, as well as give me a good idea of what it’s really like to use them.

Each test has a set of metrics assigned to it. To be sure that they accurately reflect the most important elements of a successful app, I chose these metrics based on the mental comparisons I made while actually performing the tests.

Each app is given a score from 1 to 10 on each metric. The app with the highest score in a given test is deemed the ‘winner’ of that test.

In addition to the per-test metrics, I’ve included at the end several general metrics that don’t apply to a specific test but to the apps in general.

The first test was the simplest. This was designed to evaluate the design-focused features of the apps by creating a simple vector design: the Ask Different logo we all know and love.

GIMP: I was able to use GIMP to almost re-create the logo. The part I was unable to replicate was the 3D effect on the command sign: I had to go with a uniform border instead. I also had to convert the text and background shape into raster objects (which isn’t ideal because it makes changing text and font impossible).

Photoshop: Photoshop could easily replicate the logo, complete with all 3D effects and no loss in mutability.

Pixelmator: Pixelmator came a little closer than GIMP did. I was able to re-create the drop shadow with more accuracy and leave the shape as a vector object. Like in GIMP, I had to revert to a uniform border and a rasterized symbol, but Pixelmator’s border was cleaner than GIMP’s.

Photoshop, with Pixelmator close behind.

In this test, I removed blemishes from and corrected the picture of an old photo. This was meant to evaluate the apps’ localized editing features, including healing and cloning tools, as well as global picture corrections to a faded image.

GIMP: GIMP’s Healing tool is easier to use than the Clone Stamp tool, but still requires that you select a source for each correction. Overall exposure, contrast, and color changes were easy and effective. GIMP does not boast any nondestructive editing features, which are important to me when working with valuable photos.

Photoshop: Photoshop has a one-click Spot Healing Brush which uses Content Aware Fill. Its performance was good, and I could make most corrections in one click. Picture corrections were easy and powerful. Photoshop has excellent support for nondestructive editing: all adjustments and blemish corrections can be kept separate from the original image and changed at any point.

Pixelmator: Pixelmator also has a smart one-click healing tool. Its performance was similar to Photoshop’s, but it did slightly better around edges; there were fewer times when I had to resort to the Clone Stamp tool than in Photoshop and GIMP. For healing and local corrections, Pixelmator has nondestructive editing capabilities equal to Photoshop’s. Image correction introduced a bluish tint to the photo.

Pixelmator, with Photoshop close behind.

GIMP: GIMP has a RAW processor, which allows picture correction to be made with the extra image data present in a RAW file. Unfortunately, the interface was confusing and the corrections didn’t look great: they introduced noise and tint. Localized corrections weren’t very convenient, but the results were acceptable. GIMP has some level of nondestructive editing capabilities, but not enough for me to be comfortable using it on my original copy of a file.

Photoshop: Photoshop has the most advanced RAW processor I’ve seen, and the results of both its global and localized corrections are superb. RAW files are automatically processed nondestructively, and it’s also easy to make further edits to the processed image without harming the original. Global adjustments were easier here than in any of the other apps, and local adjustments were equally easy.

Pixelmator: Pixelmator does not process RAW files, making it impossible to fully take advantage of the format. That said, Pixelmator’s global corrections are powerful and easy to use, so I was able to achieve a nice result on this basic editing job without a dedicated processor. Local corrections were quick, easy, and effective. Pixelmator does not have nondestructive editing features for global adjustments, but it does for local adjustments.

In this test, I stuck Jon Stewart’s head on Stephen Colbert’s body. This was designed to test the selection capabilities of each app, as well as how efficiently they allow a user to perform complex cloning and filling tasks. These features are important to both photographers and designers.

GIMP: GIMP’s ‘smart’ selection tools aren’t smart enough for use in complex photos, so I had to use the Lasso tool and draw around the image. This is usually less precise than automated tools, especially when dealing with hair. As usual, GIMP was the slowest and clunkiest app; it took me the longest to complete the swap using GIMP.

Photoshop: Photoshop’s smart selection tools really are the best I’ve used. Selecting the head was easy and fast, and refining the selection to handle hair well was also easy. Photoshop wasn’t slow, but it was less fluid to use than Pixelmator.

Pixelmator: Pixelmator’s smart selection tools are somewhat hit-and-miss, but they didn’t work well in this image. Like in GIMP, I ended up using mostly the Lasso tool to make my selection. Pixelmator was very fast and I got the job done more quickly than in the other apps (Lion’s Autosave and Versions were helpful here).

A tie between Photoshop and Pixelmator, with GIMP far behind.

Photoshop is the overall winner, but Pixelmator is very close behind. GIMP didn’t put on a great show.

General users, amateur designers, and amateur photographers should get Pixelmator. It has lots of great standard-level features; a decent selection of pro-level features; and is a beautiful, fast app.

Professional designers and photographers should get Photoshop. It has all the professional features that Pixelmator lacks, and the user experience is entirely acceptable.

Really, GIMP isn’t the best choice for anyone. Its feature set is acceptable, but its interface and sometimes-lackluster results mean that it’s slow and frequently painful to use. Even if you’re on a tight budget, Pixelmator is well worth the money.

Yes well I got a bit confused here. So basically Pixelmator Photo is not a non destructive workflow like the way Lightroom handles RAW data. Playing around with the app I see I can not export as RAW and having read some of the Posts and answers I think that is correct.
Please correct me if I am wrong.

I do like the application and its fun to work with. I don’t really need a explanation. Maybe I should not have posted even. 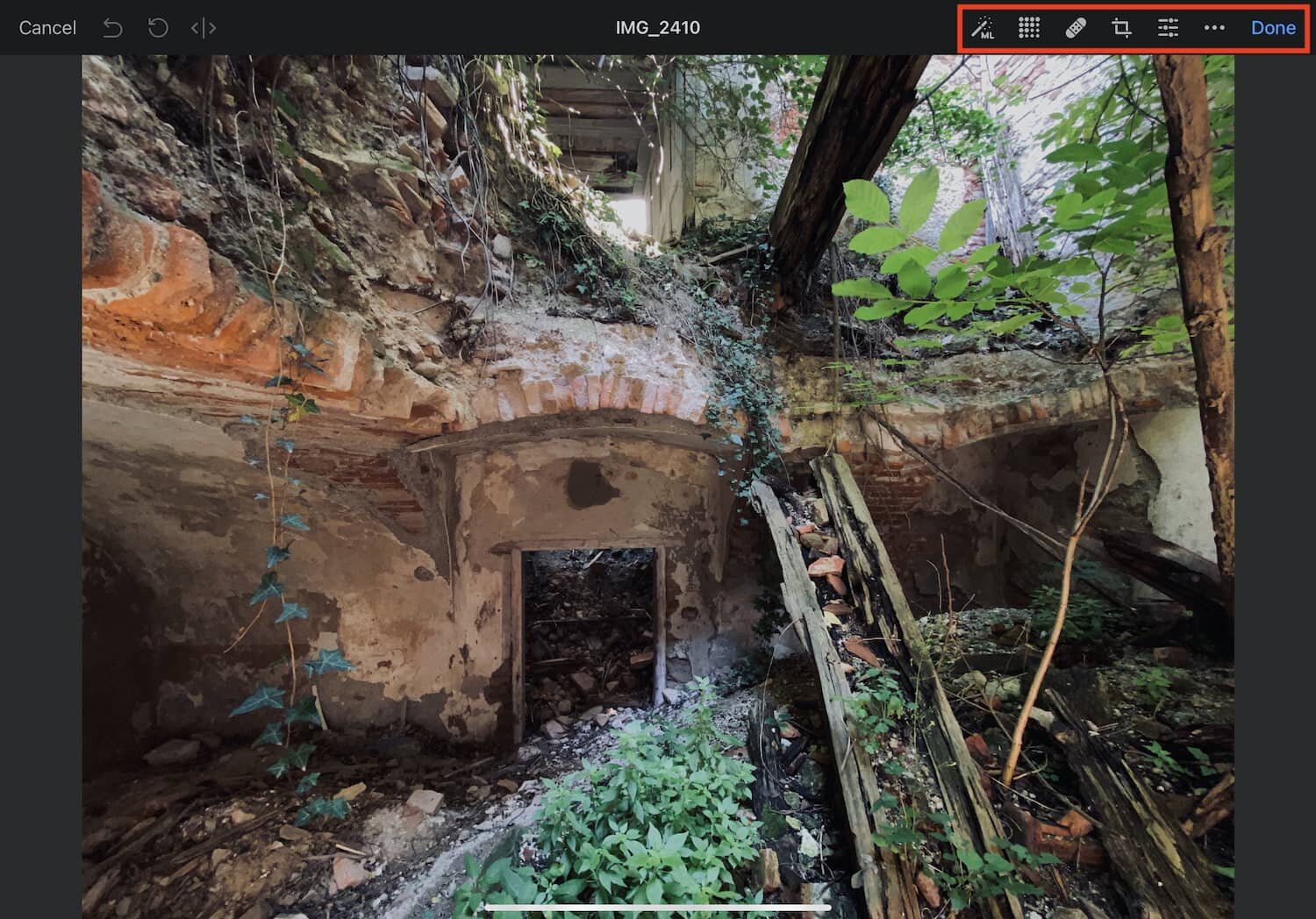 So its a Photo Editor that can work with RAW files.
Don’t get me wrong, I am not criticizing the application, why would I, and am happy I can export to TIIF 16 bit and work from there in other applications to get the results I am after. It will have its place in my workflow.