Just-in-time (JIT) inventory management, also know as lean manufacturing and sometimes referred to as the Toyota production system (TPS), is an inventory strategy that manufacturers use to increase efficiency. The process involves ordering and receiving inventory for production and customer sales only as it is needed to produce goods, and not before. Although the history of JIT traces back to Henry Ford who applied Just in Time principles to manage inventory in the Ford Automobile Company during the early part of the 20th Century, the origins of the JIT as a management strategy traces to Taiichi Onho of the Toyota Manufacturing Company. He developed Just in Time strategy as a means of competitive advantage during the post World War II period in Japan.

Both Accounting and Supply Chain professionals rely on Cash to Cash (C2C) measures to make processes more efficient and cost-effective. C2C is generally the number of days it takes to convert the expenses for raw materials into payment for the finished product (1). Many factors influence this, including inventory management, supplier performance, and collection of accounts receivable. In accounting, C2C is a good measurement of liquidity of the firm. For supply chain professionals, it measures the efficiency of the entire process, from suppliers, to manufacturing, through to order fulfillment (2).

A company can take three actions to decrease the C2C cycle:

Internal Structure
One organization that has successfully implemented a C2C system is Japanese automaker Toyota. Its operational success is often attributed to the focus on reduction in inventory. The term Toyota uses for their system is “heijunka”. Translated from Japanese, it means “make flat and level.” In particular, it refers to eliminating spikes in demand, but also creating operational efficiency and reducing overall supply chain costs. Toyota’s lean operation focuses on the idea of buy one, sell one. Toyota is able to manufacture vehicles in about the same order customers buy them (3). This adaptability to demand has given Toyota the advantage of carrying the least inventory in the field of Japanese auto manufacturers (4).

Working with suppliers
This concept is one that Toyota uses internally and it also requires of its suppliers to improve the overall C2C cycle. In the North American auto supply market, suppliers working with Japanese-owned automakers perform at higher levels than those working with U.S. automakers. Toyota works with U.S. suppliers to teach them the lean manufacturing techniques used in Toyota’s manufacturing facilities (4). These techniques ensure a short amount of time between when Toyota needs an item and when the supplier makes it.

Using small batch production, this short lead-time can be achieved. Rather than running large batches and keeping excess inventory, plants quickly run a small batch and keep inventory low. For Toyota, this translates to being able to better meet customers’ demands because manufacturing facilities do not have to wait on a particular part before beginning production on a vehicle (4).

Benefits of Heijunka
Toyota’s improvement in its supply chain benefits the automaker in many ways:

The time spent improving the systems of U.S. suppliers shows results as well.

While inventory management is an effective way to reduce the C2C cycle, it not only requires efficient manufacturing, but also effective forecasting.

The Toyota Way is a set of principles and behaviors that underlie the Toyota Motor Corporation's managerial approach and production system. Toyota first summed up its philosophy, values, and manufacturing ideals in 2001, calling it 'The Toyota Way 2001'. It consists of principles in two key areas: continuous improvement and respect for people.[1][2][3]

The Toyota Way has been designated 'a framework intended to give the instruments to individuals to constantly improve their work'.[4]

The 14 standards of The Toyota Way are coordinated in four segments:

The system can be summarized in 14 principles.[4] The principles are set out and briefly described below:

People need a purpose to find motivation and establish goals.

Section II — The right process will produce the right results[edit]

Work processes are redesigned to eliminate waste (muda) through the process of continuous improvement — kaizen. The seven types of muda are:

A method where a process signals its predecessor that more material is needed. The pull system produces only the required material after the subsequent operation signals a need for it. This process is necessary to reduce overproduction.

This helps achieve the goal of minimizing waste (muda), not overburdening people or the equipment (muri), and not creating uneven production levels (mura).

Quality takes precedence (Jidoka). Any employee in the Toyota Production System has the authority to stop the process to signal a quality issue.

Although Toyota has a bureaucratic system, the way that it is implemented allows for continuous improvement (kaizen) from the people affected by that system. It empowers the employee to aid in the growth and improvement of the company.

Included in this principle is the 5S Program - steps that are used to make all workspaces efficient and productive, help people share workstations, reduce time looking for needed tools and improve the work environment.

Without constant attention, the principles will fade. The principles have to be ingrained, it must be the way one thinks. Employees must be educated and trained: they have to maintain a learning organization.

Teams should consist of 4-5 people and numerous management tiers. Success is based on the team, not the individual.

Toyota treats suppliers much like they treat their employees, challenging them to do better, and helping them to achieve it. Toyota provides cross-functional teams to help suppliers discover and fix problems so that they can become a stronger and better supplier.

Toyota managers are expected to 'go-and-see' operations. Without experiencing the situation firsthand, managers will not have an understanding of how it can be improved. Furthermore, managers use Tadashi Yamashima's (President, Toyota Technical Center (TTC)) ten management principles as a guideline: 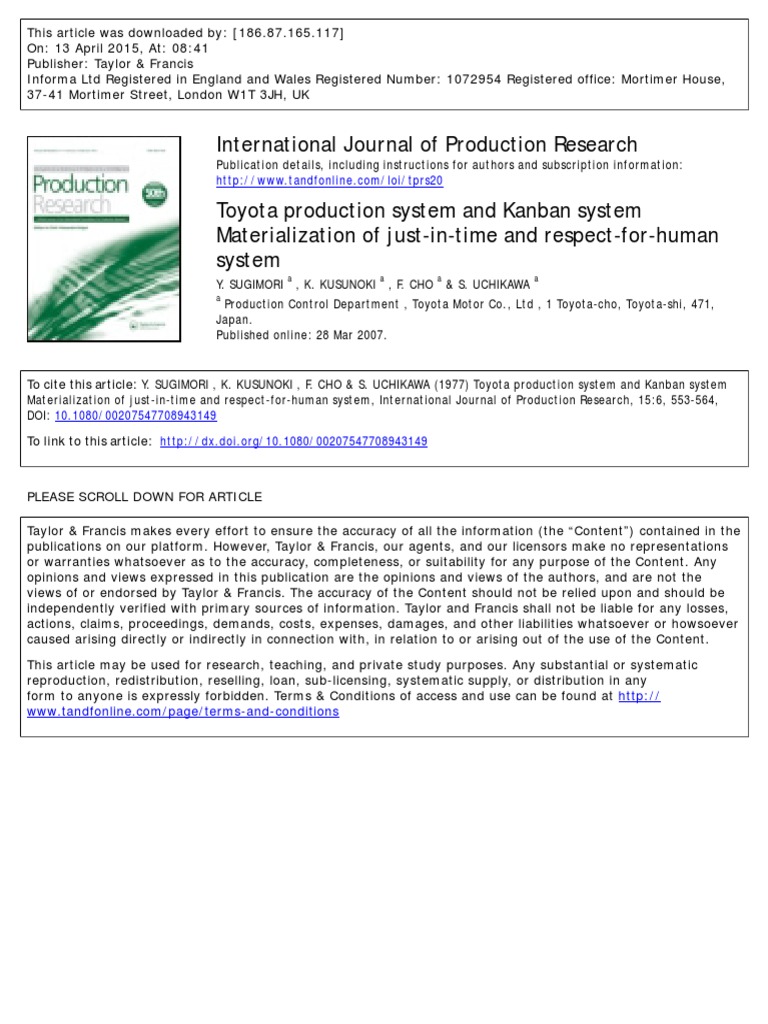 The following are decision parameters:

The process of becoming a learning organization involves criticizing every aspect of what one does. The general problem-solving technique to determine the root cause of a problem includes:

In 2004, Dr. Jeffrey Liker, a University of Michigan professor of industrial engineering, published The Toyota Way. In his book, Liker calls the Toyota Way 'a system designed to provide the tools for people to continually improve their work.'[5] According to Liker, the 14 principles of The Toyota Way are organized in four sections: (1) long-term philosophy, (2) the right process will produce the right results, (3) add value to the organization by developing your people, and (4) continuously solving root problems drives organizational learning.

The first principle involves managing with a long-view rather than for short-term gain. It reflects a belief that people need a purpose to find motivation and establish goals.

The next seven principles are focused on process with an eye towards a quality outcome. Following these principles, work processes are redesigned to eliminate waste (muda) through the process of continuous improvement — kaizen. The seven types of muda are (1) overproduction; (2) waiting, time on hand; (3) unnecessary transport or conveyance; (4) overprocessing or incorrect processing; (5) excess inventory; (6) motion; and (7) defects.

The principles in this section empower employees in spite of the bureaucratic processes of Toyota, as any employee in the Toyota Production System has the authority to stop production to signal a quality issue, emphasizing that quality takes precedence (Jidoka). The way the Toyota bureaucratic system is implemented to allow for continuous improvement (kaizen) from the people affected by that system so that any employee may aid in the growth and improvement of the company.

Recognition of the value of employees is also part of the principle of measured production rate (heijunka), as a level workload helps avoid overburdening people and equipment (muri), but this is also intended to minimize waste (muda) and avoid uneven production levels (mura).

These principles are also designed to ensure that only essential materials are employed (to avoid overproduction), that the work environment is maintained efficiently (the 5S Program) to help people share work stations and to reduce time looking for needed tools, and that the technology used is reliable and thoroughly tested.

Value to organization by developing people[edit]

Human development is the focus of principles 9 through 11. Principle 9 emphasizes the need to ensure that leaders embrace and promote the corporate philosophy. This reflects, according to Liker, a belief that the principles have to be ingrained in employees to survive. The 10th principle emphasizes the need of individuals and work teams to embrace the company's philosophy, with teams of 4-5 people who are judged in success by their team achievements, rather than their individual efforts. Principle 11 looks to business partners, who are treated by Toyota much like they treat their employees. Toyota challenges them to do better and helps them to achieve it, providing cross-functional teams to help suppliers discover and fix problems so that they can become a stronger, better supplier.

The final principles embrace a philosophy of problem-solving that emphasizes thorough understanding, consensus-based solutions swiftly implemented and continual reflection (hansei) and improvement (kaizen). The 12th principle (Genchi Genbutsu) sets out the expectation that managers will personally evaluate operations so that they have a firsthand understanding of situations and problems. Principle 13 encourages thorough consideration of possible solutions through a consensus process, with rapid implementation of decisions once reached (nemawashi). The final principle requires that Toyota be a 'learning organization', continually reflecting on its practices and striving for improvement. According to Liker, the process of becoming a learning organization involves criticizing every aspect of what one does.

There is a question of uptake of the principles now that Toyota has production operations in many different countries around the world. As a New York Times article notes, while the corporate culture may have been easily disseminated by word of mouth when Toyota manufacturing was only in Japan, with worldwide production, many different cultures must be taken into account. Concepts such as 'mutual ownership of problems', or 'genchi genbutsu', (solving problems at the source instead of behind desks), and the 'kaizen mind', (an unending sense of crisis behind the company's constant drive to improve), may be unfamiliar to North Americans and people of other cultures. A recent increase in vehicle recalls may be due, in part, to 'a failure by Toyota to spread its obsession for craftsmanship among its growing ranks of overseas factory workers and managers.' Toyota is attempting to address these needs by establishing training institutes in the United States and in Thailand.[6]

Toyota Way has been driven deeply into the psyche of employees at all levels that it has morphed from a strategy into an important element of the company's culture.[7] According to Masaki Saruta, author of several books on Toyota, 'the real Toyota Way is a culture of control.'[8][9] The Toyota Way rewards intense company loyalty that at the same time invariably reduces the voice of those who challenge authority.[10][11] 'The Toyota Way of constructive criticism to reach a better way of doing things 'is not always received in good spirit at home.'[12] The Toyota Way management approach at the automaker 'worked until it didn't.'[7]

One consequence was when Toyota was given reports of sudden acceleration in its vehicles and the company faced a potential recall situation. There were questions if Toyota's crisis was caused by the company losing sight of its own principles.[13] The Toyota Way, in this case, did not address the problem and provide direction on what the automaker would be doing, but managers instead protected the company and issued flat-out denials and placed the blame at others.[14] The consequence of the automaker's actions led to the 2009–11 Toyota vehicle recalls. Although one of the Toyota Way principles is to 'build a culture of stopping to fix problems to get quality right the first time,' Akio Toyoda, President and CEO, stated during Congressional hearings that the reason for the problems was that his 'company grew too fast.'[15] Toyota management had determined its goal was to become the world's largest automotive manufacturer.[16] According to some management consultants, when the pursuit of growth took priority, the automaker 'lost sight of the key values that gave it its reputation in the first place.'[17]

Setf To Pay Your Bill Online